I thought it was time to learn how to do programming using the GPU. On macOS, that means Metal. I started by following this tutorial. Once I got to about tutorial number 11, I started wondering if I could apply Metal to my emulators. I thought, it would be cool if all of the graphics could be done on the GPU instead of in the main thread of the Cocoa application.

Here is what I did. Note that, I’m a beginner at this, so much of the code could surely be improved. Also, some of my explanation might be wrong (although the code does display the PET screen properly), so please bear with me. The source code for the emulator is in my M6502 Bitbucket repository.

The basic principle of Metal is to draw into a texture using a pipeline. There are two sorts of pipeline (that I know about) and they are the “render” pipeline and the “compute” pipeline. The render pipeline seems to be for drawing 3D objects in. The compute pipeline is for computing tasks, but it seems it also works for drawing pixel oriented images onto a drawing texture. This, to me, seemed to be the one to use.

The Commodore PET 3032 had a 40 x 25 character display. The display was not bitmapped, but used electronics to convert the screen RAM which was effectively an array of character codes, into the raster images on the display. There were two character sets, one with upper case and graphics character and another with lower case and upper case (and a limited set of graphics characters). The character set to use was selected by toggling the CA2 line on the VIA chip. The CA2 line was controlled in software by toggling bit 1 of the VIA’s PCR register at location $E84C or 59,468. Even after more than 30 years, the I known the commands POKE 59468,12 and POKE 59468,14 off by heart.

The original code in VDUView.swift worked by blitting an NSImage containing the character’s bitmap onto the view in the right place using Cocoa technology. In fact, it calculated the lines that needed to be redrawn from the dirty rect and asked its controller for each line in turn and then used its delegate to draw the line. The delegate was responsible for rendering the image for each character and blitting it into the view.

The code that actually paints the texture is written in the Metal language, which is based on C++ and it is compiled for and runs on the GPU. Here is the code for my PET screen render.

The function is called petVDURender. The keyword kernel lets Metal know it is a function for a compute pipeline. It has four parameters:

So that is the shader compute function and runs for every single pixel on the screen, which might seem a lot. But this is the GPU and we can do lots of things at once. For example, my MacBook Pro has an AMD Radeon Pro 560X in it. This processor has 1,024 shader cores, which (I think) means 1,024 parallel thread, in theory.

The VDU view has to change because it renders itself in a fundamentally different way. When it needs updating, instead of redrawing the dirty rect using Cocoa functions, it has to rerun the compute pipeline. Our compute function has two input buffers, so each time it runs the pipeline it has to provide those two buffers.

The first step is to initialise the compute pipeline. Here is the code from init(frame:device:). Note that the view inherits from MTKView, not NSView​.

The first thing we do is make sure we have a Metal device. This is an abstraction of the GPU and it should be passed in to the initialiser as a parameter. If it isn’t, we use a Metal API call to get one.

We then create a command queue to send commands to the device.

The line framebufferOnly = false is necessary because MTKView assumes that you are only writing to the GPU buffer and optimises itself accordingly. Unless you tell it that is not allowed, it won’t let you use a compute pipeline with it.

When it’s time to draw something, we need to assemble a command for the GPU that tells it: what to do i.e. run the pipeline state we created with the compute function in it; what to draw into; what the two buffers for the character set and the screen are. Below is the main code in the draw(_ dirtyRect:) function, with commentary.

We have set up a command buffer for commands to send to the GPU and created a command encoder for our particular command.

We have set the pipeline state for this command and the texture to draw into. This text will be passed as the first parameter of our shader function. Note that drawable is an unwrapped version of currentDrawable which is a variable maintained by MTKView​ for our convenience. I think it changes every time you render something into it.

The above code sets up the character bitmap buffer. The character bitmap is supplied by the charDelegate which has a new function for this purpose. Off the two classes that conform to this protocol, only PETChars works. The NativeChars class will throw a fatal error.

The character bitmap is created on demand and cached until the PET changes its character set from upper case to lower case or vice versa.

Now we have set up the screen buffer and copied the PET screen memory into it. We do it line by line because that means we don't have to amend the controller, although this is probably an optimisation point: we should be ab le to copy the entire screen into the buffer in one go.

This sets up the threads. The pipeline state tells us what the optimum number of parallel threads is and then we dispatch one thread per pixel in groups defined by the optimal values supplied.

We're done so we send the command buffer to the GPU. 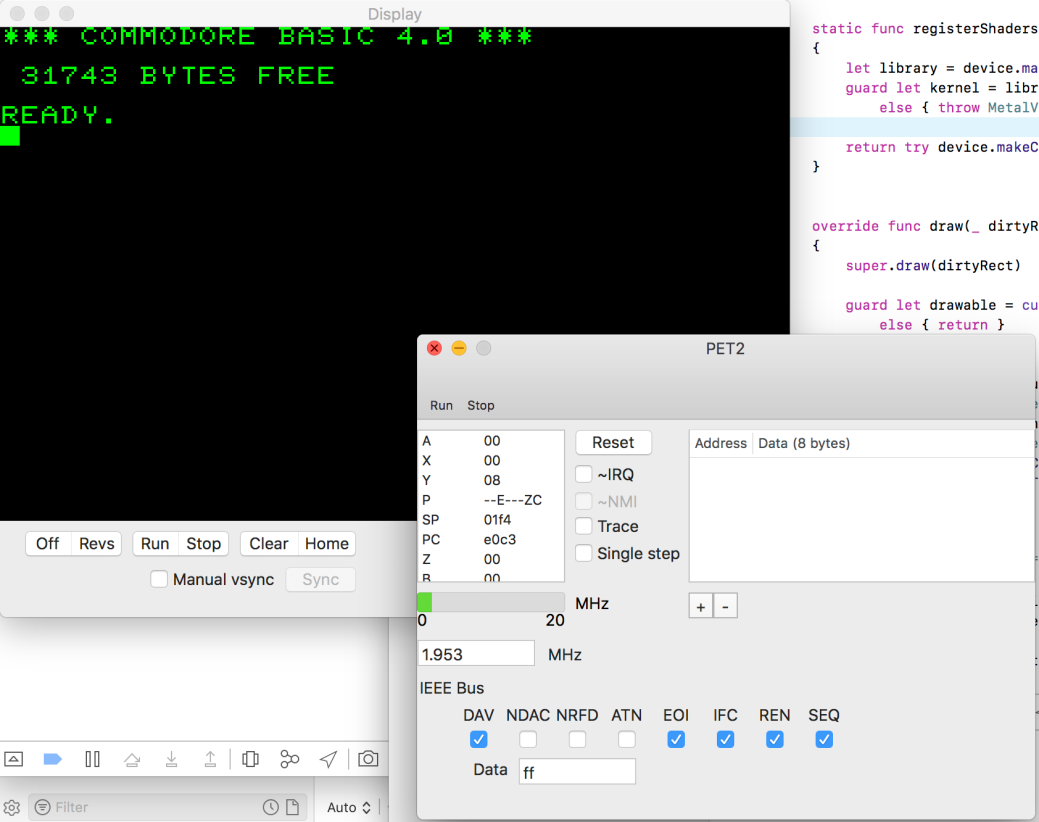 Was it worth it? Well, in debug mode, it appears to more or less double the CPU’s speed from 1 to 2 MHz. However, in release mode, it makes almost no difference to the CPU speed at all. This is because the CPU has always run in a different thread to the display code.

Next stop: the same exercise for the Spectrum emulation.

This site uses Akismet to reduce spam. Learn how your comment data is processed.